Confederate flags were not the only symbol used by white nationalists marching in Charlottesville, Virginia.

To the dismay of the Detroit Red Wings hockey team – so was their logo. Well almost.

On the left is the Detroit Red Wings logo; on the right is the white nationalist group’s logo: 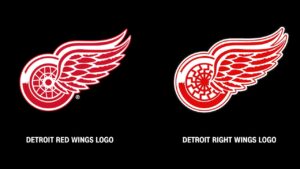 The spokes in the wheel on the Detroit Right Wings’ logo were altered to resemble the Nazi SS lightning bolt.

“[t]he Detroit Red Wings vehemently disagree with and are not associated in any way with the event taking place today in Charlottesville, Va. The Red Wings believe that hockey is for everyone, and we celebrate the great diversity of our fan base and our nation. We are exploring every possible legal action as it pertains to the misuse of our logo in this disturbing demonstration.”

Do the Detroit Red Wings have a case against the white nationalists for trademark infringement?

As mentioned in one of last week’s blog posts, Is Pandora PayPal?, courts rely on a factor analysis to determine whether there is a likelihood of confusion between two marks. It would be difficult for the Detroit Red Wings, or the NHL, to establish these factors – that consumers were confused into marching with the white nationalist group believing it to be affiliated with the Detroit Red Wings.

There are two types are harm that arise from dilution: blurring and tarnishment.

Trademark dilution through blurring (15 U.S.C. § 1125 (c)(2)(B)) is the most common type of trademark dilution. It occurs when the identity of a mark is weakened (or blurred) through its unauthorized use on dissimilar products.

Trademark dilution through tarnishment (15 U.S.C. § 1125 (c)(2)(C)) occurs when the unauthorized user uses the mark in connection with goods or services that degrade the brand, or replace the positive associations with negative associations. There have been several mainstream cases of trademark dilution through tarnishment. For example, an adult novelty shop named “Victor’s Little Secret” was sued by Victoria’s Secret. Moseley v. V Secret Catalogue, Inc., 537 U.S. 418 (2003). The Sixth Circuit upheld an injunction barring the defendant from using the mark “Victor’s Little Secret.”

If you need assistance deciding whether your trademark has been infringed, diluted or tarnished, or if someone has accused you of trademark infringement, dilution or tarnishment, contact  Kaitlin Corey at kcorey@gdldlaw.com, Jim Astrachan at jastrachan@gdldlaw.com, or Donna Thomas at dthomas@gdldlaw.com.

We’ve built our reputation on providing intellectual property services and business law to our clients involved in businesses with creative products. From copyright registration to trademark clearance and everything in between, Jim Astrachan, Donna Thomas, and Kaitlin Corey of Goodell DeVries cover everything you need to know to protect your IP assets.

Learn about our IP audits here.